A lucky Wests member has claimed over $1.3 million dollars on a winning Keno Classic 10 ticket at Wests City!

At Wests, looking after you, our team and the wider community is our priority.

Our COVID Safe plan includes our commitment to the wellbeing of members and employees, physical distancing, hygiene and cleaning as well as record keeping.

Find out more about the measures we have in pace as part of our COVID-19 safety plan, providing you and your family with a safe and clean venue.

YOUR SAFETY IS OUR PRIORITY

Wests New Lambton, Mayfield, Cardiff, City and Nelson Bay are open in a modified format providing access for Wests members only from 10am daily (Wests New Lambton from 9am on weekends).

Our dining outlets, gaming lounges and bars will be open with social distancing in place.

John Campion has formally been appointed as a Director of Western Suburbs (N'cle) Leagues Club Limited (and each company in the Wests Group) effective 18 April 2019 with an honorarium of $25000 per annum.

John's appointment to the Board will complement the Board's skills and experience and assist the Directors fulfil their duties.

John had a 35 year career providing audit and advisory services to a wide variety of successful businesses in our region. He was a partner at both KPMG and PwC for over 20 years and reached senior leadership positions within both organisations. He delivered professional services to public and private sector businesses involved in hospitality, health, mining, financial services, manufacturing and various government authorities.

"I am delighted to be joining the Board of an iconic business in our region. Wests has a long and proud history of running a successful business which not only provides fantastic benefits to its members (who total over 100,000) but also provides significant support to our local community. The years ahead will be exciting times for Wests as it embarks on a series of transformational projects and I am looking forward to playing a role in continuing the legacy that has been built since Wests was formed almost 60 years ago".

John has been appointed for a period of 1 year to fill the casual vacancy created by the retirement of Professor Scott Holmes.

THE ANCHORAGE NAMED AMONGST LUXURIOUS SPAS IN THE WORLD

Our very own Spa Lucca, located at The Anchorage in Port Stephens, was named alongside luxurious spas in New York, Paris, London, Tokyo and LA by Harpers Bazaar!

Article below or view here. 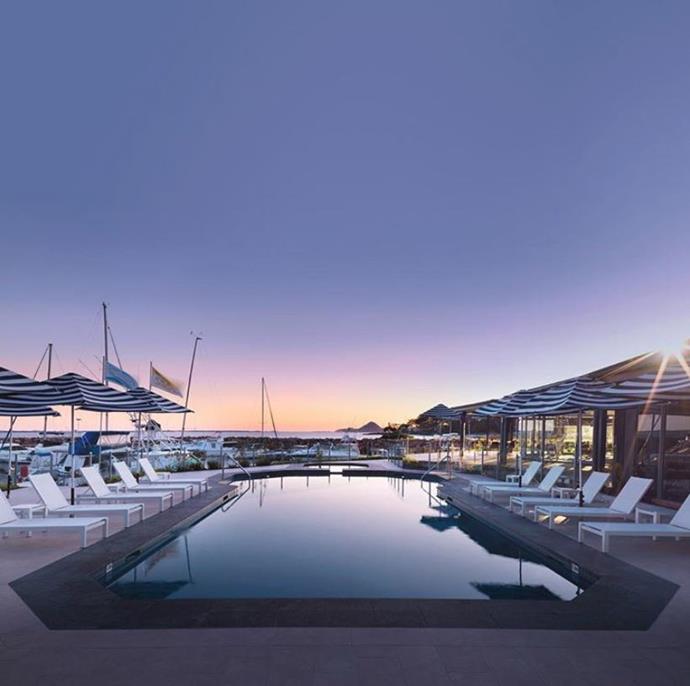 A telltale sign you're besotted with the location of your spa jaunt: you start googling houses for sale in the area minutes after you've checked in. I plonk down my towel next to my poolside sun lounger, take in the view over Port Stephens—in the foreground, a marina filled with superyachts; in the distance, Corrie Island—then log on to realestate.com.au and start plotting how to turn this scene into a daily reality.

The Anchorage at Port Stephens has just undergone a super-stylish refurb and I'm hooked. This neck of the woods—26 beaches in total, give or take a cove—is two and a half hours' drive from Sydney and breathtakingly beautiful, with pockets resembling Hawaii. (Trek up to Tomaree Head lookout and you'll see what we mean). That said, it's a tourist hotspot, the accommodation a hotchpotch of caravan parks, low-rise holiday apartments and quintessential Aussie beach shacks.

"Hamptons" is a term we all throw around with abandon to describe the popular decorating style associated with the resort towns of Long Island, New York, but there's a reason everyone loves that restrained palette of pale grey, navy, cream and white. It makes stressed-out city slickers feel calm and serene. The Anchorage's interiors are Amagansett on steroids, helped no doubt by the fact the accommodation fronts an unspoilt bay and natural dunes, while balconies and chic black-and-white striped umbrellas lend a summery look. 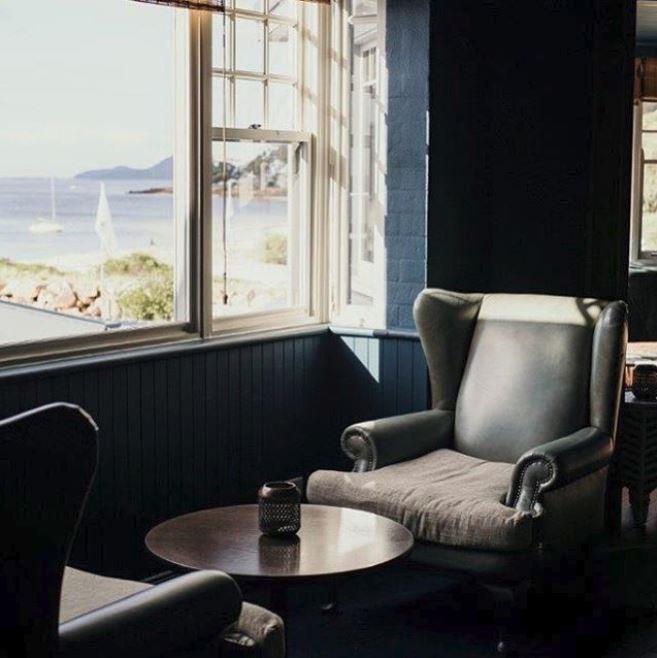 Money has been poured into this place (it was previously a Peppers-branded property pre-refurb), and it shows. Particularly in Spa Lucca, which is set over two floors and boasts four treatment rooms, two of which are couples' suites, and a Vichy shower room. Robed up, I hit the steam room and heated whirlpool to prep for what I'm road-testing: a Body Polish, Wrap & Spa Jet Capsule Experience ($235). I'm not a fan of Vichy showers, so feel a tad meh about the whole thing until I actually see the 'pod' I'm about to climb inside. This is water therapy on a whole other level. Think various Vichy shower and water massage techniques, vibration massage, steam, infra-red and ceramic dry heat plus LED colour therapy—which, spa manager Danielle Bondini explains, adds an emotional element to the treatment. "LED also has healing benefits for skin," she explains. "The red light deeply penetrates to boost collagen production, while the purple and blue lights work on the surface and are more calming."

The 75-minute treatment starts with a body exfoliation using Sodashi Jojoba Bead Body Polish, followed by a firming French pink-clay body mask that hopefully reduces a few new stretch marks I've acquired. To enhance the effect of the active ingredients, the steam and infra-heat component kicks in, which, when combined with the shower jets—and the constantly changing coloured lights—is when the magic happens. The light energy takes on a therapeutic aspect when it's in a specific wavelength so your skin cells convert that energy into ATP. In non-scientific speak, this is like filling up the petrol tank of your collagen-making cells.

I'm warned things will get hot, but because my face is sectioned off in another area of the pod and has a beautiful cooling breeze focused on it, I'm OK. The only component of the treatment I truly struggle with is the tail end: the bit where you have to sit up and dry off. You know that vacant look newborns get? Guilty. I grab my robe, shuffle back to my room and muster just enough energy to scour the real estate sites for a refresh. Priorities, people.—Eugenie Kelly

“This state-of-the-art facility will foster rugby league at all levels – from juniors to professionals – with three new training fields and multi-purpose facilities,” Mr Ayres said.

“The new Centre of Excellence will be the first high-performance rugby league training facility between Sydney and the Gold Coast and for the first time ever players will have a pre-game warm up area.”

The NSW Government is contributing $10 million towards the Knights Centre of Excellence, matched by $10 million from the Newcastle Knights owners The Wests Group.

Minister Ayres today also confirmed the location for the facility as adjacent to McDonald Jones Stadium’s Southern Grandstand inside the Hunter Sports and Entertainment Precinct at Broadmeadow.

Newcastle Knights Chief Executive Officer Philip Gardner said the centre will be a massive boost for the Knights which are the number one supported professional team in regional NSW.

“With playing fields proposed for nearby District Park land - this will enable the Knights to bring their entire operations into one facility, reducing costs, improving integration outcomes and providing an additional venue for local and regional community needs,” Mr Gardner said.

The NRL Centre of Excellence fund was created after the NSW Government redirected funds previously allocated as cash payments for NRL Grand Finals towards community based Centres of Excellence. Funding has been approved for five NSW NRL Clubs - the Bulldogs, the Knights, the Rabbitohs, the Roosters and the Sharks, in a dollar for dollar match of each club’s contribution.

The Wests Group would like to place on record its appreciation of the work of Jack Ashman, who stepped down from the Wests Group board earlier this year after 16 years.

Mr Ashman, a licensed bookmaker and retired university lecturer, has been an instrumental part of the Wests Group’s development.

“I would like to thank Jack for his significant contribution to the Wests Group over the past 16 years,” says Owen Kilpatrick, chairman of the Wests Group.

“Jack’s knowledge and prompt decision making was a huge benefit to me as chairman.”

Philip Gardner, CEO of The Wests Group, says, “Jack’s contribution to the continual development of the Wests Group cannot be understated, and I thank him for the part he has played.”

Over his time on the board the club’s assets have grown from $74m to over $300m.

Sound governance is the hallmark of all successful organisations. Jack’s input as part of the board has allowed the club, over the last 16 years, to expand by merging with Nelson Bay RSL, Cardiff Panthers, City Panthers, as well as recently acquiring the Newcastle Knights.

Jack’s advice and good humour will be missed around the board table.

The Wests Group appoints Katie Brassil to board

The Wests Group Australia has appointed Katie Brassil to its board of directors.

Katie Brassil has been formally appointed as a director of the board, effective from 22 February 2018 with an honorarium of $25,000 per annum.

Katie's appointment to the board will complement the board's skills and experience and assist them with their duties.

Katie is also Executive General Manager External Affairs for Centennial Coal, is a director of the Westpac Rescue Helicopter Service and the Hunter Tafe Foundation, and has over 30 years' experience in the private sector and all three tiers of government. She is an expert in stakeholder engagement and consultation, economic development and public and government relations.

From 2014 to 2017 she also served on the board of the Newcastle Knights, which The Wests Group purchased late last year.

"I am delighted to be joining such an extremely successful and highly regarded organisation," says Brassil. "As well as the obvious gender diversity my appointment brings a diversity of career experiences and personal skills."

"Having a diverse board is essential to the continued growth and development of the business, and we look forward to Katie extending her influence across The Wests Group."

Katie has been appointed for a period of three years, to fill the casual vacancy created by the retirement of Jack Ashman.

1 December 2017 Members who renewed their membership for 2018 on or before 30 November were given an entry into a draw to win $20,000 of Charlestown Square EFTPOS cards.

Congratulations to Elaine Randall, who was the lucky member drawn at random from our barrel of entries.

All members are welcome at Wests! Choose Wests for your next social outing and enjoy the perks!

Find out more about the measures we have in place as part of our COVID-19 safety plan, providing you and your family with a safe and clean venue.
*Discount applied when full Wests membership card is swiped at the time of purchase.